The Didier source lies in the heart of Martinique’s lush vegetation, and was discovered by the army in 1833. Located 200 metres above sea level, in the hills above Fort de France, it is protected by mountainous terrain and a 40-hectare tropical rainforest park.

Didier’s water comes from the southeastern slopes of the Pitons du Carbet mountains and naturally filters through the soil to form groundwater at a depth of 4000 to 6000 metres.

Between 1853 and 1934, it was exploited as a thermal spring, with people coming from across the Caribbean to enjoy the benefits of Didier water.

In 1935, the governor of Martinique authorised the extraction and bottling of “Fontaine Didier” water, which earned the label “sparkling natural mineral water”.

The spa activity declined in 1943 when the social security department allowed people taking the waters to do so across the Atlantic,  and in 1945 a Didier water bottling plant was built. 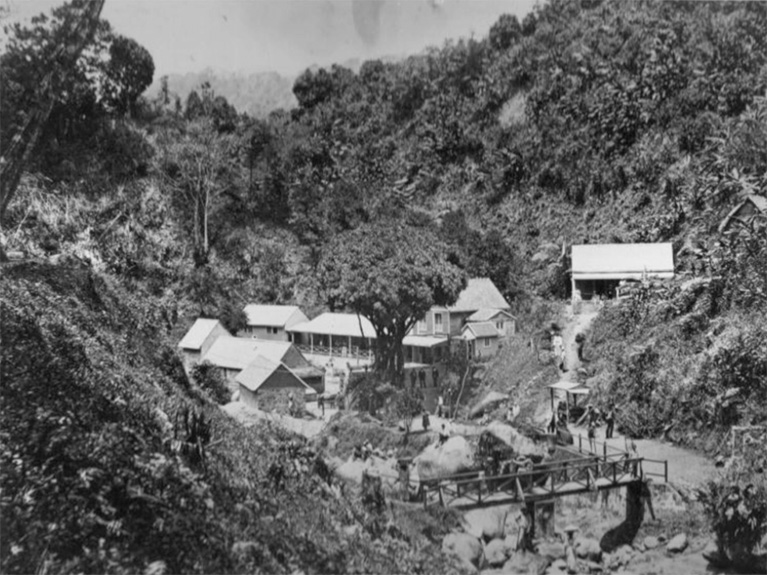 It was – and still is – the only naturally sparkling mineral water in the whole of the Caribbean.

Besides bottling Didier’s sparkling mineral water, the company also made Coca-Cola, Vittel Délice and Bel Orange under licence, but in 1963 a cyclone destroyed all of the equipment and the licences were not renewed.

The company reverted to the exclusive production of sparkling water and eventually went into a decline. In 1986, the company took on a new identity (change of management and business name), to become the Société d’Embouteillage de l’Eau Minérale Didier (SEEMD). Significant changes then took place for it to become the modern business it is today.

A new investment policy was put in place, in connection with the exponential growth of plastic packaging. In 1992, the company invested in a bottle blow-moulding machine and began manufacturing its own bottles on site.

By investing a total of more than two million euros, the company was able to develop its production machinery, diversify its range of products (flavoured waters, still waters, etc.), implement a distribution policy and set up a structured and dynamic sales team.

In 1997, a quality assurance department and internal testing laboratory were created. Their joint goal is to ensure product safety, customer satisfaction and contribute to opening up new markets.

To meet market demand, in 2008 SEEMD embarked on a search for a new source to complement its existing mineral water range. On 27 July 2011, the Mabelo source was authorised for bottling by prefectoral order. As a result, four new products went on sale from September 2011.